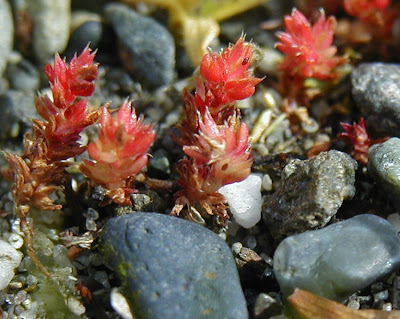 My exercise for today was twofold: to test stretching the limits of my D450, and to get closeups of the red plant I took area shots of Friday, partly so I could try to identify it (anyone help?), partly just for the exercise & entertainment. These are so small -- about 5/8" high -- that I couldn't have gotten these shots without adding a closeup lens to the camera, and I didn't have it with me. Besides, I was testing my new folding stool Friday, not exploring what I can see lying on my tummy. 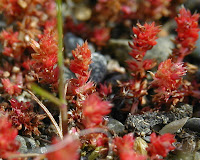 To mount filters or closeup lenses on the D450, one must clip an adapter onto the front of the camera, and screw the accessory into the adapter. With the adapter in place, one must rely entirely on the LCD, which of course if totally washed out by the sun. By shading with hat or hand, almost enough can be seen to guess that the camera is pointed the right direction. I took seven shots and was pleasantly surprised that parts of two images were actually usable. I missed the tiny white flower that was in amongst in a couple of shots -- can't even tell which shots it was supposed to be in.

Not quite the process of "photography" as I understand it, but I brought back pictures that are fun, attractive, and possibly useful, at least after cropping, so it counts as something.

Before I took the closeups, I wanted to try out my 2x telephoto adapter on the turtles. It screws into the same adapter as the closeup lens, so involves the same kind of juggling of parts & pieces and camera. Except for snapping on the adapter, it is much like changing lenses on a interchangeable lens SLR. No profit for the SLR, since there one has the lens (or body cap) that one is removing, as well as the new lens and its front & rear caps -which go in the pocket in this case, but onto whatever you take off in the case of the SLR. Whuff.

The turtles were fun. The process wasn't quite as bad as the closeups, since it was easier to shade the LCD and focus wasn't as critical. Again, this is an enhancement to what I managed to get on Friday. Better detail, but the chromatic aberration is rather severe.

So if the objective is picture, I pretty much got the pictures I went for & missed the additional opportunities I would have liked to have gotten. Image quality is pretty much right on the edge of what I can accept, with some of the chromatic aberration rather bothersome.

If the objective is process, then this doesn't work. I'm not sure I could do it spontaneously at all (I didn't have any more success when I got the stuff, and then I had less understanding of the head problems) and I doubt I could do it often on a planned basis.

The head stuff was mixed. The greatest benefit probably came from getting me down to look at the plants closely, with a secondary benefit from coming home with pictures I am glad to have. But there was a penalty involved in the process, sufficient to cut my beach time short and have me leaving in a mildly unstable condition. 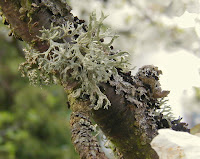 I may have done better shooting lichen in the back yard yesterday -- I think there are at least five different kinds.

Good learning experiences overall, and I will continue the experimentation. I will also continue looking at cameras. Along with the Olympus SP-570UZ, I have looked at several cameras of similar or lower cost. To get a better idea of what might be missing by sticking to that price point, I have also looked at some more expensive cameras, including the Fuji S100fs (which almost displaced the 570 as my leading choice) and Nikon D300.
at 13:33