This is an interesting wheel kaleidoscope I found in a local store.

Wheel kaleidoscopes have disks with patterns and colors that rotate independently in front of the mirrors, instead of chambers full of loose objects which tumble into different patterns in typical kaleidoscopes most of us knew as kids.

In the wheel kaleidoscope, as two wheels with their transparent patterns overlap differently, a wide variety of image effects can be formed. By exchanging the wheels, even more patterns variety can be achieved. 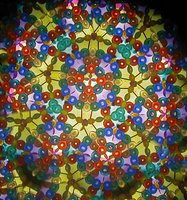 But I wanted a little more variety and didn't have any blank disks, so I turned to transparent fusible beads (by Perler or Hama). Wow! Wonderful results, either in combinations with one of the acrylic wheels, or paired with another bead disk. That's one of my disks between Archie's paws.

I omit beads in every other row, so that more of the colors of the second disk show through, though the gaps between the beads and the holes in the middle already provide some show through, and of course you get color modifications through the combinations of colored beads. Various disks have either odd rows or even rows gapped, and one of each is chosen when they are paired. 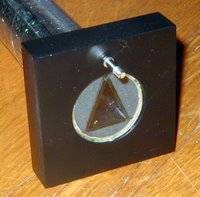 The arrangement for mounting the wheels intrigues me as well. Rather than mount the axle to the cardboard kaleidoscope tube, which probably isn't strong enough, a wood block with two holes is used: a large hole into which the mirror tube fits, and a small hole which mounts the axle with sturdy support. Since the axle is off center to the block, the block extends beyond the disks on one side, and provides a rest when the kaleidoscope is set down, rather than having it rest on the disks. 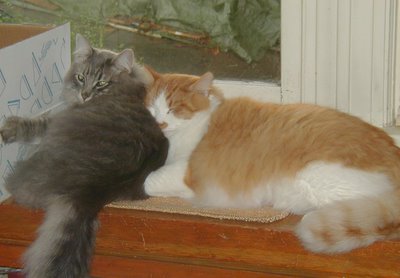 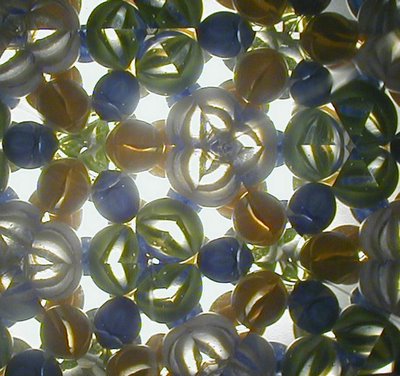 I haven't lost all my marbles, I found some to put in a kaleidoscope.
at 18:33 3 comments: Links to this post 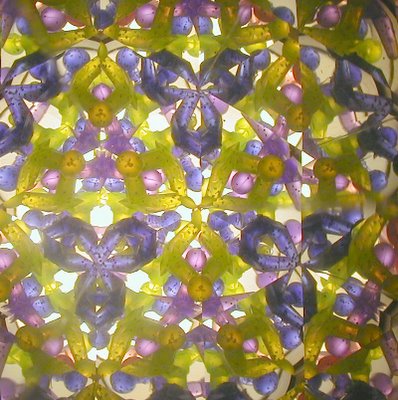 These large semi-soft jacks were not difficult to cut with a sturdy pair of sharp scissors.

I have to confess that this wasn't much of a kaleidoscope experience -- the large pieces fit tightly enough that they didn't move around much unless I pulled the cap off and shook things up.

Smaller pieces might work better. And perhaps mixed with something slipperier.
at 18:07 No comments: Links to this post 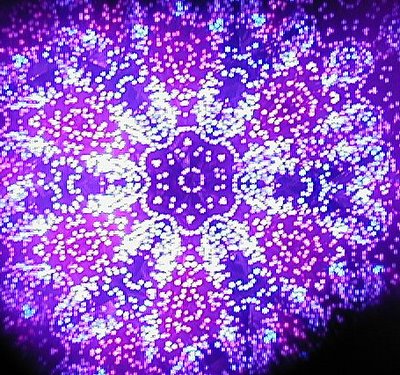 I have to admit to a bit of false advertising here: What you see by eye doesn't look like the photograph!

In real life, the dots are colored against a black background. But the autoexposure function of my digital camera managed to make the dots white, and in doing so, surrounded each dot with an aura the color the dot should have been.

Eventually I may experiment with taking an accurate picture, but in the meantime, I think this is downright cool, so this is what I am posting.

This came off a peg at the dollar store, but actually cost $1.39. I wasn't terribly put out, and not at all disappointed when I opened it up and tried it out.

The image was made by removing the ampules from the X-Motion, stuffing the fiber optics into the object end, and wiggling things until the results looked good.
at 17:36 No comments: Links to this post 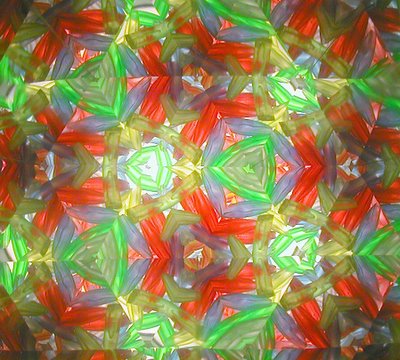 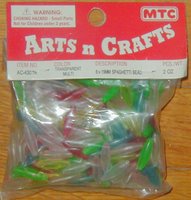 These looked pretty bad hanging on the hook in the dollar store, but they looked quite a bit better with my pocket flashlight shining through them, so I thought I'd give them a try. Espeically since there were lots for various experiments, and the green glowed nicely illuminated by UV.
at 17:04 No comments: Links to this post 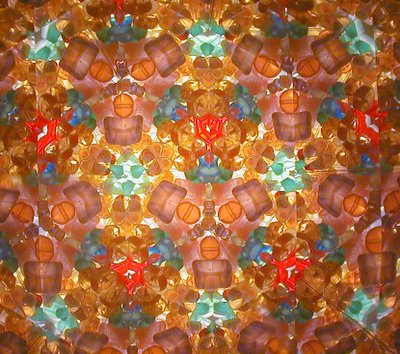 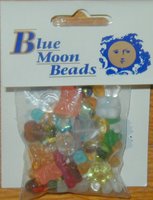 From JoAnn Fabrics. "Summer Splash" appears on the back, over the bar code.
at 16:42 No comments: Links to this post 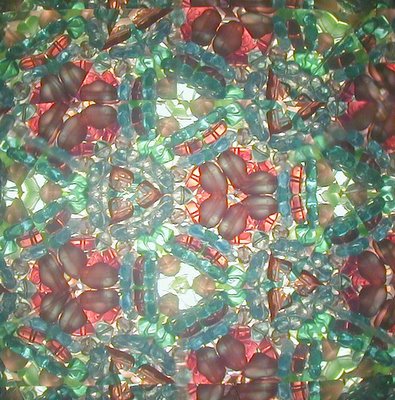 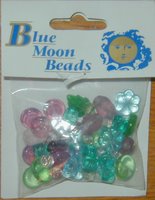 From JoAnn Fabrics. "Spring Fling" is on the back, over the bar code.
at 16:37 No comments: Links to this post 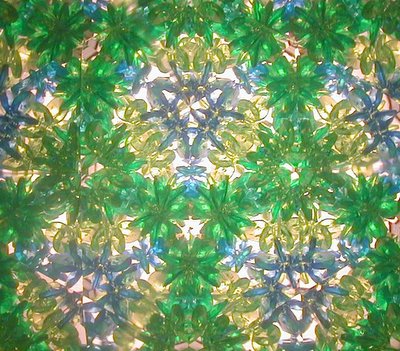 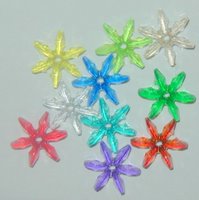 I'm sorry, but I didn't keep the package these came in. They are a larger version of what is in a few of my toy kaleidoscopes (I only have toy kaleidoscopes, intended for children). I got them in the local toy store for $0.69 for a small package, which still had enough that I can fill an object chamber with mostly one color.
at 16:36 2 comments: Links to this post

I am going to post a new kaleidoscope images in new posts, rather than what I said here previously. 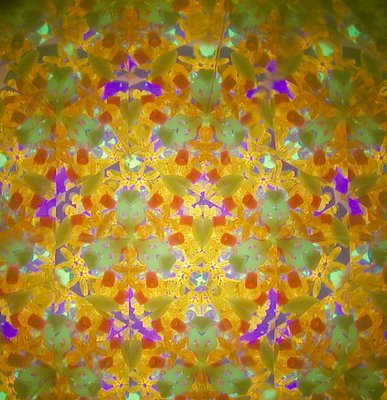 Glow-in-the-dark pieces and florescent beads illuminated by a "black light" flashlight.
at 16:27 2 comments: Links to this post 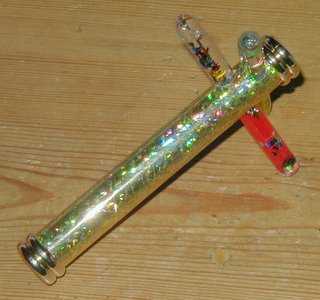 Kaleido- scopes have been very special to me since I was very young. Lately, I often looked at a kaleido- scope or two in a store, and wanted to find the ones I know are in the attic.

The other day I finally bought one, and found that having more than a quick peek was indeed still very satisfactory, even if that particular kaleidoscope was rather cheap and not entirely pleasing.

Not having any luck looking around in the attic, I went shopping again. These were much more satisfactory, and indeed, having a variety to switch between enhances the experience.

Now some of this is surely because I am currently perseverating on kaleidoscopes. (Aspies use "perseverations," and related forms, to refer to the very intense, often compulsive, interests to which those of us with Autism Spectrum Disorders are prone.) Perseverations generally feel good. That's part of why we do them.

But I think that the patterns, with their symmetry and repetitions, are also triggering brain processes that are proving beneficial. Patterns and repetition play very central roles in autism, from the stereotypical hand flapping, to the kinds of activities, objects, or music, we are often attracted to. Not that the mainstream population doesn't also enjoy the same kinds of things, but as in so many things, we tend to be more extreme. 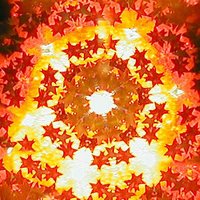 The "Fluid Fantasy" "X-Motion" in the picture is less than six inches long, and with the fluid-filled glitter ampules removed and packed alongside, is quite pocketable. Without the glitter ampules, you can apply a cats-eye or transparent swirl marble or superball to the object end and rotate it various directions for very satisfactory different kaleidoscope imagery.

So I pocketed it, and took it to my brother's house yesterday evening, where we gathered for a belated family Christmas with my parents.

There were ten of us, plus a dog. That many people interacting tends toward overloading me. Too much "noise," not just in the audio sense, but visual, social, and spatial as well.

Periodically through my part of the evening (I left early, but not as early as I had intended), I took out the kaleidoscope and gazed through it for a while, enjoying the changing patterns and getting the becoming-familiar effect of stimulating one part of my mind while somehow calming another. (I am reminded of the pharmaceutical treatment of hyperactivity with stimulants.)

It was successful, and I actually had a reasonably good evening.

Part of that certainly must be credited to overall improvements in both my mental state and my "tool kit" over the last year, and years, but I think beyond a doubt some of the credit goes to the kaleidoscope.

It is nice to have another tool in the toolkit. 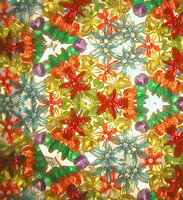 [The red/yellow kaleidoscope images above were made with the pocket kaleidoscope with both tubes in place. All the images were made primarily for test. Now that I know it will work, there will be more!]
at 08:33 2 comments: Links to this post 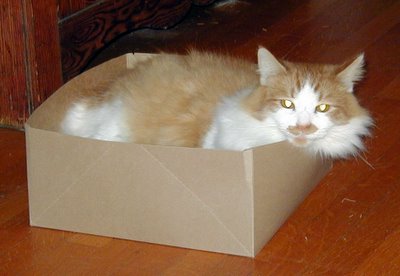 We still share stories sometimes of "Barney Box Cat," also known as "Barney Boat Cat." Thus we take special delight whenever we find Webster having crammed himself into an undersized box for a wee nap.
at 16:53 1 comment: Links to this post