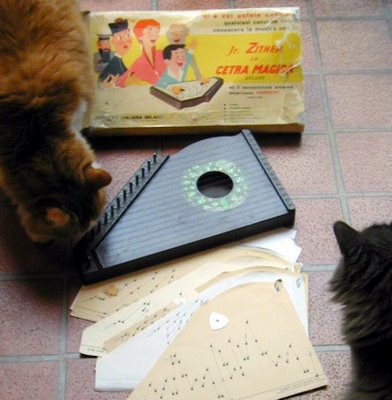 Various musical instruments in toy stores have long caught my eye, but I either have been put off by some aspect of quality or function, or have been totally deterred by price. Since becoming re-enthused about music by way of a video soundtrack, I have been looking again, and the "Music Maker" children's zither (or lap harp) appealed greatly, albeit at a daunting $30-$33.

Last week in my favorite sellers space at the Aurora Antique Pavilion, I found a Harbert Italiana "Jr Zither," with several markdowns bringing it to $6, and including a selection of music sheets. Cheap enough for a trial.

The zither is great! I even found an online site that helped me tune it (and also has audio samples if you are curious what this type of instrument sounds like).

The cool thing about these and their ilk is that the music slides under the strings, so playing is like dot-to-dot. You are watching your fingers and the notes at the same time, instead of looking back and forth and having to translate. Also you only use one hand to play, rather than two hands having to try to do different things -- something that runs up against the cross-coordination problems so often found with Aspergers Syndrome (though many Aspies have exceptional musical ability - there is a lot of variation among us).

Many of my better pleasures have been toy store finds. For years, I often felt a little awkward about this, but since my Aspergers Syndrome diagnosis, I have come to accept that pervasive developmental disabilities can make toy stores a very appropriate activity source. Much of the time "beginners" or "hobbyist" materials for adults are just too demanding.
at 09:09 1 comment: Links to this post 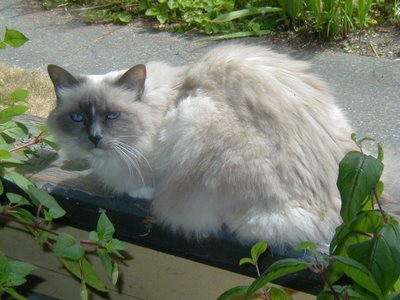 This little guy showed up in our back yard the other morning and soon settled in on our front porch for the rest of the day. He was still there when we went to bed, but was gone in the morning.