In 1977, I made a bunch of trips out of San Francisco in various directions (though not West), and several of those involved flying over the Basin & Range country of Nevada - if not quite the route(s) of the Lincoln Highway referred to in recent post, then at least very similar country.

I found it daunting to gaze out the window and trace roads that climbed & wound over one obstacle, only to descend, cross a lonely, unoccupied valley, and climb again.

Nary a car in sight over most stretches of road, and even then, more likely to be a pickup. Battered, or soon to be.

In those pre-cell-phone days, I wouldn't have wanted to drive a car through there. Not sure I would now, given what I recall of cellular coverage maps, unless I had a DeLorme Earthmate PN-60w + inReach for satellite messaging.

Some may say "no guts, no glory," but I'm not sure I ever was looking for glory, and I'm certainly not now.

I devoured John McPhee's Basin and Range when it came out a few years later. Now I can't find my copy, so I am guessing that after twenty-five-plus years of taking up shelf space, with only the occasional glance, it went to a used book store two or three years before I was finally ready to read it again.

A copy will be here from the library in a few days, and if anything, the lesson is that I could have parted with it much earlier, not that I should have kept it.

I'm tempted to look for a used copy of the Delorme Nevada Atlas, though, since the only library copy is restricted to those able to visit the Seattle Public Library's downtown Temple, and is not available to us scruffy users of the branches.

I imagine tooling along in an entirely adequate & reliable vehicle, simply enjoying the scenery, the nature, the road ahead and behind, the traces of human interaction with the land, of settlement persistent or abandoned. Birds, trees & shrubs & flowers, geology. Photography.

Not that having it is critical for what is unlikely to be more than a fantasy road trip. One with PN-60 + inReach, in-car naturalist & co-driver, and of course unlimited funds for lodging, meals, car repairs, & tacky souvenirs.

Guess I'd better buy another lotto ticket some time.

I saw a guy skateboarding yesterday who had a beard that was mostly gray. He looked like he could have been my age, but was probably a few years younger.

There aren't very many skateboarders my age.

When I was a younger kid, on the urban streets of Portland, the closest thing to a skateboard was the two halves of a metal roller skate (the kind with the adjustment key) nailed to the ends of a two-by-four. Properly, there was supposed to be an apple crate nailed on end to the front of the two by four, with a narrow board nailed across the top to provide handles.

They could be pretty fancy.

But sometimes, because the box came off in a mishap, or because apple crates were becoming harder to find, or because of sheer impatience, kids tried to ride on just the bare board.

So I was surprised when we moved from rural Lake Stevens to the suburban hills of Lake Forest Park in 1962, or maybe a year or two after that move, that there were a few kids riding similar boxless devices where a piece of plywood had replaced the two-by-four. It was flat, but had some rounding on the ends, and apparently some flexibility in how the skates were mounted.

And it worked much better.

The fancy tricks came later, but apparently the journey was underway, and some kids my age were part of it. But I didn't see students commuting to college classes for a few more years after our age group, and it seems like the folks who did that are the ones more likely to still be doing it as grandpas.

Not that there aren't probably skateboarders in their eighties who were already too old for such foolishness when they started in their thirties.

I don't think I am about to take up skateboarding now, but I think I will continue to do things that qualify me for 'to old for such foolishness.'

And make a point to try out some new foolishnesses every now and then.

When I was a kid, my dad would routinely point out "the old road" as he drove the family on some highway or another.

In the Columbia Gorge, the Old Road was a true classic - the Columbia River Highway, built between 1913 and 1922 as America's first Scenic Highway - but even in other areas, WPA era two-lanes had more romance than the modern, 1950s, four-lanes.

In the sumer of 1958, we took a long family car trip from Portland, Oregon, to the Philmont Boy Scout Training Center, in New Mexico, where my dad was to take a course. There & back was a scenic tour of Western National Parks and areas in between. Largely on two lane highways, some of which may have been the true, classic Route 66 - but most of which had that flavor, even if we were actually going south or north, in other states.

Less than fourteen years later, driving my own car from New Jersey to Portland in January, I chose an Interstate-20 route to avoid as much winter weather as possible, but when I now read about Route 66, I recognize that I was witnessing the last of the classic era in places, though at the time I thought it was long gone, buried under the Interstate.

Even in 1958, we had stretches of new-built Interstate, with more areas of construction. By 1972, the only place I recall being on 'the old road' was between Atlanta and Birmingham, where long stretches of two lane wound through small towns with many right-angle turns - but many stretches were on detours and shoo-flies among massive Interstate construction projects.

In 1975, riding with a friend from Fort Indiantown Gap, Pennsylvania, to Kearny, New Jersey, the "Lincoln Highway' markers along an elderly stretch of divided highway were only mildly intriguing, but when I came across a Lincoln Highway book the other day, I was more than intrigued, and immediately requested it and another from the library. A third, I had to order since neither local library system has it & I was excited enough to want one to keep on my shelf, and $10 for a used copy seemed reasonable enough, though it will be hard for it to measure up to Greetings From The Lincoln Highway: America's First Coast-to Coast Road.

Encouraged by some recent discussions of Road Trips, I found myself evaluating the Lincoln Highway in Nevada & Utah as road trip possibilities - as implausible as it might be for me to go there myself, with the medical and mental disability constraints, it is still great fun to read about and explore in maps and pictures.

In the 1960s and 1970s, most drivers were just relieved to have the ease and speed of the new Interstates, but even then, there were folks dedicated to exploring the byways and bypassed towns and scenery. Now Old Highways themselves seem to have become a minor, but nontrivial, interest area of their own.

I'm waiting for Road Trip USA: Cross-Country Adventures on America's Two-Lane Highways from the library. Maybe it will have a bibliography.

Seems like there is a lot more fun yet to be found in this topic.
at 20:09 No comments: 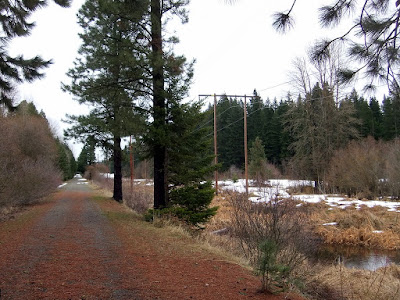 For many of us on the Wet Side of the mountains, going to Eastern Washington is a desirable outing because it gets us some sunshine.

But on Friday, the Dry Side was just about as wet as the Wet Side - and has been really wet all over the region.

But we had fun nonetheless.

My first challenge is joining up with my daytrip companion, Chris, which requires more driving than I normally do - and is a commitment to driving myself back home afterward that for disability reasons is not always an optimal choice.


But I did it, albeit with a "turn around & come back home option" that left things up in the air to a degree that would discourage most folks trying to plan a day.


Even once I was there, we didn't decide right away that we were going to go over the Pass, but after an early lunch, we decided to go for it, with Chris driving.

There was much snow on the approaches and summit to Snoqualmie Pass, but it was a fun drive even with rain coming down.

By about Easton, our dog-like companion, Floyd, was indicating a need for a potty break so we
stopped at West Nelson Siding Road and walked east on the Iron Horse Trail (one of the Best Rail Trails around) a bit, in intermittent light rain.

Still having an urge to travel, we headed east to Thorp, mostly in rain until the very end. But crossing the summit at Elk Heights, East of Cle Elum, puts one in open country that looks very much like The West of film and legend. It seems to be somehow good for my soul.


Thorp was fun & Floyd went wild - it must strongly resemble where he spent his puppyhood
in Northeastern Washington. He very much wanted to get out of the car & go herd cattle. He was so engrossed in the cattle that he missed the sheep on the other side of the car, not to mention a herd of twenty or more mule deer very close to the road in an open field. 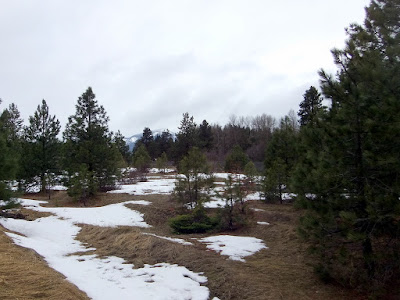 Before we found someplace we wanted to walk, we were back in the rain, so decided to head back west on old US 10 toward Cle Elum - great views of the Yakima River in a canyon below with railroad on one side and the Iron Horse Trail passing through old railroad tunnels on the other.

Back on I-90, we drove West through rain again to Golf Course Road exit (formerly East Nelson Siding Road) which didn't quite grab us, so we followed nelson siding road - fun!
- back to the west end and walked West from the same place we had earlier Walked east.

That was also quite nice - at least visually and in nature studies, if not on the ears - it's maybe a bit too close to i-90 traffic noise, though I appreciated the proximity to the active BNSF line. Even if there weren't any trains while we were there, they were at least a possibility - rare on a Rail Trail. 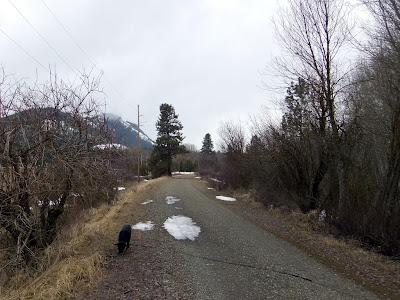 Well satisfied, we headed back over the pass. Back at Chris's, I quickly hopped in my car to try to get home before the traffic got too miserable, but apparently it had gotten miserable without me. But I still made it home okay, and quite pleased with the accomplishment and especially the outing.