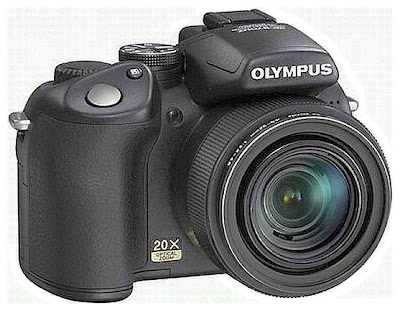 Olympus SP-570UZ 10MP Digital Camera with 20x Optical Dual Image Stabilized Zoom
I have been using cameras since about 1960, with various degrees of seriousness about my photography, and with cameras of a wide range of sophistication and features. It seems like over the years I tended to go back & forth between simple snapshot cameras with convenience features and more advanced cameras with more options and accessories.

Often I had more than one camera at once, trying to fit my various needs.

In retrospect, I now better understand how my then undiagnosed autism spectrum disorder was manifesting itself in my contradictory needs, but also in my abilities.

My earliest "serious" camera was an old folding Zeiss of my dad's. Taking a picture was an interesting process:

Over the years that followed, the succession of cameras generally sought to automate at least some of those tasks while not compromising too much on image quality or size of camera.

Sometimes I was happy to just have a compact convenient camera. Other times I wanted to be able to reach out with telephoto or spread my grasp for wide angle.

For a while in the late 1960s, I had an Instamatic with crude autoexposure and a spring-wound film-advance drive. Other times I had SLRs with various lens -- my favorite was an Olympus OM-2 with motor drive and a compact zoom (the camera body in one jacket pocket & lens in another) -- it broke my heart when that camera was stolen, and I haven't owned a feature-rich camera since.

For several years, my camera has been a 1.3 Megapixel Olympus D-450 with 3x zoom. It did what I wanted, it still does most of what I need, and I have enjoyed it.

As camera technology has moved on, I have occasionally admired and coveted newer cameras. But the truth is, these have been rough years, and I have probably been better off with something familiar and more tilted toward convenience than flexibility or features.

The cameras I've looked at might have done much more of what I wanted to do (or have wanted to do at various times), but it was still true that no one camera did it all - there was still a requirement to choose between feature trade-offs. 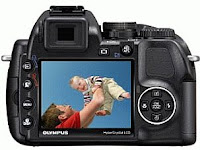 But lately the 450 has been hinting that it is getting tired. And then the other day I ran across a blurb for the new Olympus SP-570UZ

At first glance, it seemed to have all the features I had been looking for, all wrapped up in one.

At second glance it still did:
[There are more features and functions than these, but that is not necessarily an advantage for me. :)] 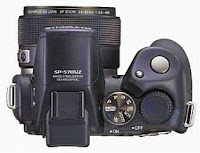 Which is not to say that their weren't trade-offs or compromises. The image quality, even it 10 Megapixels, isn't comparable to a good digital SLR with comparable Megapixel count. The viewfinder won't compare to an optical viewfinder, and there may be some performance issues.

But the sample images I've seen, even in extended telephoto, as well as lowlight and macro, look quite satisfactory to me (yes, those web pages are in German, but scroll down to "Download der Bilder in Originalgröße" and there are a group of links to download batches of original-size image files.

So I have downloaded the instruction manual from the Olympus web site, and will be studying it to see how manageable the actual operation seems.

If all looks good, and goes well, I hope to be able to get one soon.

In the meantime, I will probably come back to this blog and look at specific features and what they mean to my photography -- for example, how wide angle plus extended resolution stand in for a shifting lens. Writing helps me think & organize my thoughts.
at 15:06

I have teste the Olympus but it wasn't my thing. Instead of it i baught a Canon EOS 450D.