The creamer is an old family piece. We had quite a bit of this pattern in the 1950s, of which I also have a few butter-pats and a cereal bowl. I think we may have a sandwich plate around somewhere too, Maybe under a plant.

Jo found the sugar bowl, sans lid, at Goodwill a couple of weeks ago.

That got me interested enough to track down that it is Louisville Stoneware, Harvest Pattern (sometimes known as Pear Pattern), and find a bunch of it on Ebay. 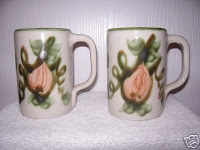 Yesterday I won a pair of mugs on ebay -- these still seem like the "proper" thing to drink cocoa from.

Most of what I see on Ebay doesn't grab me much, but it is fun to look at.

And it is something fun to look for in thrift stores. The bottoms of larger pieces have a "John B Taylor" signature in blue, while the smaller pieces just have a script "JBT."

Not something I want a lot of, but but great fun in small quantities.

Sometimes I say I was all but born in a pear orchard. Apple is closer to the truth, but hey, there were pears nearby.

There was also a pear tree on my grandmother's property on Vashon (actually she was on Maury Island & they are connected).

Pears are good things. (Pairs are too [waves at Jo].)

Have you told me about being virtually born in an orchard?

Big blizzard when I was born. My dad had taken my mom down to stay with the doctor's family in town rather than risk being snowed in.

Most of the orchards were apple, but some were pear -- see the Van Horn link -- the place halfway along the road from the green arrow to the right edge is what ours was like - maybe it is the place.

I should have included this Hood River pear link. :)

You're more autistic then me :P