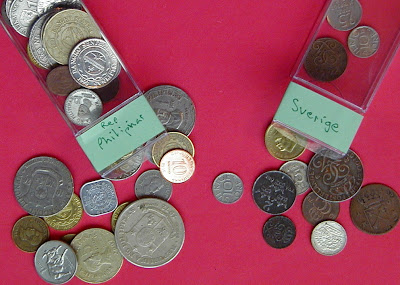 Sometime in that interim when I was having trouble posting, I got myself into coin collecting.

Occasionally in the past, I had flirted with the incipient interest, but was frightened off by imagined ramifications of my obsessive compulsive tendencies with what I read about how collecting was done, and a lot of the prices I saw.

In the meantime, I've gotten a bit better at steering my obsessions, even if controlling is still too strong a word, and came to understand that most of what one reads about coin collecting is written and published by folks with an economic interest in developing the high-end market. Those folks want you to complete a category, and desire the most pristine condition coins, because that's where their profits are.

I prefer coins that show they have been used - a well-worn old coin might have been in the pocket of someone in in my reading or an old picture. Doesn't seem so likely for rare coins or unworn coins, even for a fictional character.

So I've been having fun with coins mostly out of the boxes of rummage coins that most dealers have for a dime or so each, as well as getting multi-coin lots off the internet, which tends to keep the cost down - sometimes way down if you are willing to risk lots of duplicates.

I've sorted my coins into cheap little folding clear plastic boxes, so I can still handle them, while being able to find specific coins or groups without getting frustrated. But I still want a bulk bunch of coins for simple play -- similar to a button box - so that is where the excess duplicates go.

The autistic side of my coin collecting is that I like to line coins up and put them in order by date or denomination or size or whatever. With both a sorted collection, and a jumble, there will be plenty of available variations on that play.

In my more intellectual moments, I enjoy the linkages of coins to geography and history - both have been longtime interests (together more often than not) that have become harder to indulge, and coins seem to be filling my need for an easy, tactile way to extend that enjoyment.

oooo, you can stack coins

stacking coins is good - little Towers of Hanoi - sometimes i try to make the step width equal to the height - larger diameter coins tend to be thicker, but not always