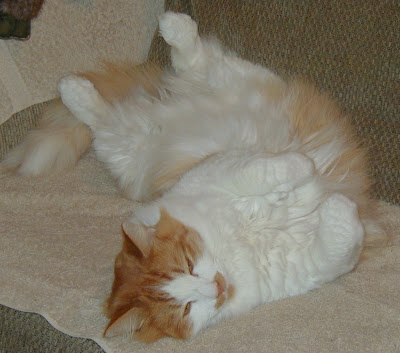 Well, Chris & I had nice beach, then loafed around here for a while.

As I stood talking to her at her car as she was leaving, suddenly she started flapping & blurted 'Webster!'

I looked back & Webbie was on the front steps about to depart.

I roared back over to the steps hoping to startle him back onto the porch but he leaped off the north side, under the azalea.

I managed to grab his tail under the railing, but couldn't get more.

Archie was peeking through the front door.

I called to Chris to come help and dragged a yowling Webbie backwards by his tail so I could grab something more substantial.

Chris meanwhile was burrowing under the azalea from the front & I yelped to her that I had Webbie, she needed to stop Archie who had gotten to the steps himself (perhaps mostly out of curiosity about Webbies yowling).

She got Archie back into the house just as I managed to drag Webbie under the railing (not by the tail, I had a good fair grip by then).

Both cats got pets and cuddles and nobody seems terribly angry at anyone, but everybody is rather alert, cats and people.

I expect Chris will not have a problem with drowsiness on her drive home.

I'm sure I pulled the door to as we went out, but I must have not gotten it firmly enough that Webster couldn't work it open again.

Lesson learned by me, I hope, not just Webster.

Sorry there aren't any pictures of the adventure, the above image is Webbie recovering from all the excitement. :)
at 16:34