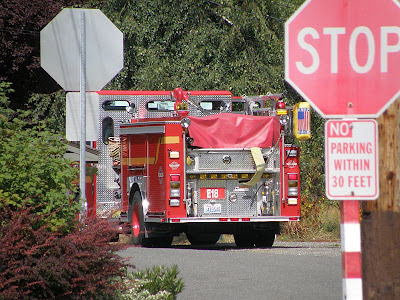 The first siren could have been an ambulance.

The second siren was obviously a fire truck and stopped nearby.

The picture above is from our front yard and shows the firetruck stopped across 85th.

When I checked the 911 web site, it showed a '4RED - 2 + 1 + 1' respnse - two engines, a ladder truck, and a batallion chief - but I only heard the two sirens & the web site showed the incident as closed within a few minutes - soooooooooooooooo apparently no fire - or the first folks there put it out with a hand held fire extinguisher.

The truck in the picture is probably standing by to run hose from the fire hydrant if needed.

did melvin put on a hat?

Melvin had on a hat.

He wants a firefighter helmet

Maybe he'll have one soon.